Fact or Fiction: I Know This Much Is True 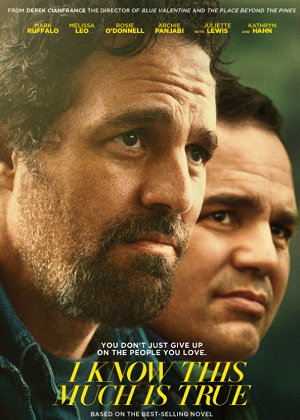 HBO’s I Know This Much Is True chronicles the lives of identical twins Dominick and Thomas Birdsey, both played by Mark Ruffalo. Thomas suffers from paranoid schizophrenia as Dominick struggles with Thomas’ illness and navigating the mental health system. Our last article, which discussed I Care a Lot, exposed that film as largely a work of fiction, which oversimplified and misrepresented the guardianship process. I Know This Much Is True, however, stays true to its title in its realistic portrayal of the challenges faced by families with loved ones with mental illness.

I Know This Much Is True opens in early 1990’s Connecticut. Thomas is a patient in a psychiatric facility, but manages his schizophrenia with medication, enabling him to have a part-time job. During a schizophrenic episode, Thomas cuts off his own hand in a public library, believing his sacrifice will end the Gulf War. At the hospital, Thomas is adamant he does not want his hand reattached, a decision Dominick supports because he feels a duty to honor his brother’s wishes. The event leads to Thomas’ transfer to Hatch Forensic Institute, a facility for the severely mentally ill. The scene depicting the transfer is difficult to watch. Thomas is forcibly dragged into the ward and Dominick is not permitted to contact Thomas’ treatment team for guidance. Much of the rest of the series is devoted to Dominick’s efforts to secure Thomas’ release from Hatch.

Dominick’s frustration and anger during Thomas’ admission to Hatch underscores the need for those struggling with mental illness to engage in planning to ensure their wishes and treatment preferences are achieved. These goals can be realized through the execution of a Psychiatric Advanced Directive, a document that allows an individual to express their preferences about the scope and nature of his care and names an agent to advocate for the patient if he is unable to do so. New Jersey has a secure registry for Psychiatric Advanced Directives that makes registered directives available to designated facilities and services so a patient’s wishes are honored as much as possible.

In addition to a Psychiatric Advanced Directive, further planning can be done via a General Durable Power of Attorney and or a Health Care Proxy. A General Durable Power of Attorney grants authority to another person to make financial and personal decisions and a Health Care Proxy enables a designated agent to access medical information and make medical decisions. These documents are useful in many instances, but particularly when a health crisis occurs and immediate decisions need to be made regarding the transfer of a patient from a hospital to an appropriate facility or residence and assets need to be accessed to effectuate such a transfer. Proactive planning helps families minimize the stress associated with a mental health crisis, but it is important to understand that these documents can be revoked at any time. As a result, it is sometimes necessary to commence a guardianship proceeding for an individual who is unable to manage his or her own affairs and refuses the assistance of others.

Involuntary commitment to a psychiatric institution is real. In New Jersey, the involuntary commitment process is generally initiated after a screening from a crisis team. If the crisis team determines the individual is a danger to himself or others, he may be involuntary hospitalized for further evaluation. The facility has 72 hours to obtain an Order of Temporary Commitment, which requires a demonstration of probable cause that the individual needs to remain hospitalized because he or she continues to be a danger to himself or others. If the Order is issued, the matter is set for a commitment hearing within 20 days. Testimony may be provided by psychiatrists and relatives to demonstrate that a commitment should or should not be continued. If clear and convincing evidence exists to demonstrate the individual remains a danger to himself or others, the commitment will continue, with a review occurring every 3 months for the first year and annually after that. In the series, Thomas’ social worker, Lisa Sheffer (played by Rosie O’Donnell) believes Thomas would benefit from a less restrictive environment, but his commitment is continued for an additional year after he hits Sheffer at his commitment hearing and states that he would kill in the name of Jesus.

The series highlights the impact Thomas’ condition has on Dominick, who is Thomas’ only relative providing him with advocacy and support after the death of their mother. Although Dominick finds compassion and assistance in Thomas’ social worker and a therapist, there is no mention of Dominick availing himself of any community resources. New Jerseyans are fortunate to have a number of organizations that support loved ones of those with mental illness. One such organization, the Mental Health Association of Essex and Morris County, provides family support services such as counseling, support groups, workshops and advocacy. It also offers an emergency support team for families in crisis. I Know This Much Is True ends each episode with contact information for The National Alliance on Mental Illness (“NAMI”). NAMI, which has chapters in New Jersey, also provides support to family members of mentally ill persons in the form of support groups and crisis assistance.

Overall, this series did a far better job than I Care a Lot of accurately portraying applicable legal issues and medical standards. The author and producers deserve credit for featuring the difficulties faced by loved ones of mentally ill persons and increasing awareness of these issues.